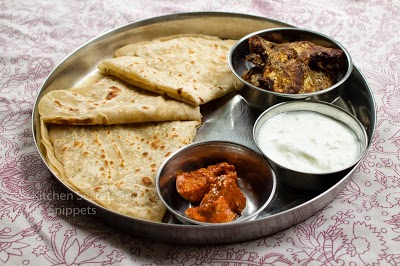 Hi guys, Today’s post is going to be rumali roti, if you are a regular reader then you should know by now that I’ve already made one version of it long back. The version one contains mostly whole wheat flour , no ghee and it’s slightly a simpler version compared to the one listed here. Here am going to make use of rice flour paste to sandwich two roti’s which reduces the cooking time by half compared to the version one. Also I’ve added ghee and equal amount of wheat flour and APF. Take your time to go through the list and don’t be worried about the process. It is plain simple once you are done with the preparations, let’s dig in then…

Divide the dough into equal sized balls and cover them again. Take 2 out of it, set aside. Spread the working area with little bit of flour and roll the dough to palm sized, apply the already made(ghee+rice flour) paste on both of the rolled out dough and spread them on both. Now place the dough one on top of the other, just like a sandwich with the paste in the middle. Seal the dough on all sides.

Now roll out the dough into thin roti as far as it can stretch without tearing it off. Meanwhile, heat a heavy bottomed pan, inverted, just like as shown in the pic. Mix the salt with the water and keep it ready while the pan is getting hot. Sprinkle the salt water when the pan is smoking hot, now carefully take the rolled out roomali roti and place on top of the hot pan. It will take hardly seconds to cook as it is piping hot, now flip the roti to the other side and cook again for few seconds. Fold the roti to cook, if needed, in case any of the area is not cooked.

Carefully transfer the roti to the working place, leave for 30 seconds. Now try to separate the roti’s which was sandwiched earlier, don’t worry it will peel off easily with no trouble. Carefully fold them and place them in a container. Cover it. Repeat the same process for the rest of the dough.